What is Friction Quiz

What is Friction Quiz for Kids

Friction is the resistance of motion when one object rubs against another. Anytime two objects rub against each other, they cause friction. Friction works against the motion and acts in the opposite direction.

When one object is sliding on another it starts to slow down due to friction. This means it loses energy. However, the energy doesn't disappear. It changes from moving energy (also call kinetic energy) to heat energy. This is why we rub our hands together when it's cold. By rubbing them together we generate friction and, therefore, heat. 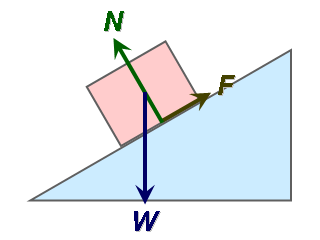 The force F of friction pushes back on the block.

Another way to reduce friction is to change the types of materials in contact with one another. For example, ice contacting with steel would produce less friction than rubber would on concrete. This is why ice skates slide so easily on the ice, but you don't slip when wearing rubber shoes on the sidewalk. These different materials are said to have different "coefficients of friction".

Friction is also a great help to us. After all, we would all just be sliding around everywhere if there wasn't friction to keep us steady. Friction is used in car brakes, when we walk or climb a hill, making a fire, skiing down a hill, and more.

There are two main factors that will influence the total amount of friction: 1) the roughness of the surfaces (or the "coefficient of friction") and 2) the force between the two objects. In this example, the weight of the object combined with the angle of the tray will change the force between the two objects. Play around with different objects and see how these two factors change the friction.

Rolling Friction - Rolling friction occurs when a round surface rolls over a surface, like a ball or wheel.

Although wheels are great for rolling and reducing friction, they couldn't work without friction.

It would be really tough just to stand up without friction.

The harder two surfaces are pressed together, the more force it takes to overcome the friction and get them to slide.

Fluid friction is used a lot in water parks so we can slide smoothly and fast down giant slides.